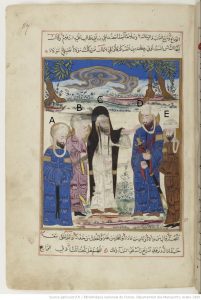 Last April, I delivered an online audio/video presentation at the University of Panthéon-Sorbonne in Paris, entitled Social Network analysis in Islamic Medieval History. The goal of the presentation was to introduce to specialists of Islamic “Medieval” history the tools and methods of Social Network Analysis (SNA) so as to discuss together the use of these tools and their potentiality in our on-going research. I talked about the developments of SNA, its history, its concepts and the analytical framework it may help to develop along the way it is mostly used today by social and data scientists, and how it is sometimes used in the field of history. I also talked about some SNA case studies that I have been working on concerning 15th century scholars mentioned in Ibn Hajar al-ʿAsqalānī’s chronicle,  the Inbāʾ al-ghumr bi-abnāʾ al-ʿumr, that should be included in the book I am preparing for the ongoing ERC MMS-II project at Ghent University. I tried to convince the audience that despite the fact that SNA has yet to propose a major contribution to the field, it has an important potential for future research and specific questions, as it is today the best and easiest way to map and analyse complex relational networks, and because most Medieval Islamic Arabic historical writings are full of relational displays.

So what is SNA exactly ? Social Network Analysis is a methodology – or a group of methods – to study networks, particularly to describe and analyse relationships between social actors. Social Network Analysis looks at relationships within a dataset. In network analysis, one looks at vertices (or ‘nodes’, for example the social actors) connected by lines (called ‘edges’, the types of relationships) : in its simplest form and representation, a number of nodes are connected by a series of edges/links. SNA describes a set of relationships between actors that may be represented by a graph and analyzed using a number of specific methods. SNA was developed many decades ago : going back at least as far as 1934 with the introduction of Jacob L. Moreno’s sociometry (J. L. Moreno, Who Shall Survive ? A new Approach to the Problem of Human Interrelations, 1934), which had a major influence on the later development of SNA, itself grounded on graph theory in mathematics. SNA has provided some interesting insights since the 1980s, as a valuable method (and research tool) and it is now quite widespread, especially among sociologists (H. White, Identity and control, 1992 ; S. Wasserman, K. Faust, Social Network Analysis: Methods and Application, 1994). In modern Social Sciences and Humanities research SNA is often employed in the context of a Digital Humanities (DH) framework. There are some pertinent reasons for that, including the growing use of computational tools and programming packages to use and apply SNA to distinct research questions. Yet, to insulate oneself against the tempting glitter of novelty, let’s be clear that SNA is not some ‘flash in the pan’, and in relation to what we commonly think of today as « Digital Humanities », SNA has its own long history and epistemology.

My own research is concerned with the patterns of relationships that are laid out in Ibn Hajar’s chronicle, and its careful orchestration by the author, including his own self-display. For these purposes SNA is obviously an interesting track to explore, as some historians have illustrated in the last decades, like Isabelle Rosé (University of Rennes 2, France) in her study of Odon de Cluny’s (d. 942) aristocratic networks, with a not so complex, parsimonious and careful use of SNA methods. 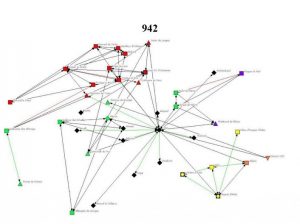 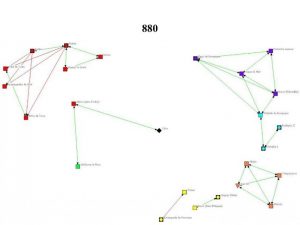 Graphs illustrating the development of Odon de Cluny’s relational network in 880 and 942, from I. Rosé, 2008 http://revista-redes.rediris.es/html-vol21/vol21_5f.htm#_ftnref49

The use of SNA has been (slowly) growing in the field of history (and particularly in Medieval history), but SNA still feels like something shiny and new, offering users the promise of a dazzling scientific breakthrough complete with the impressive veneer of graphs and complex formulas. Further evidence of a “boom” in its usage comes from the growing list of publications that refer to it in the last decade. The many recent historical studies that use SNA demonstrate the presumed value of these methods and tools, and present interesting analytical possibilities for historians dealing with historical relational networks (http://historicalnetworkresearch.org/bibliography). But whereas historians may have only been discovering/rediscovering these methods and tools recently, there is nothing methodologically new under the sun here: as early as 1993 Christopher K. Ansell & John F. Padgett had already published a very interesting study on the rise of the Medici family in Florence during the first decades of the 15thcentury, using Social Network Analysis (J. F. Padgett & C. K. Ansell,  “Robust Action and the Rise of the Medici, 1400–1434”, American Journal of Sociology 98, 1259–1319). 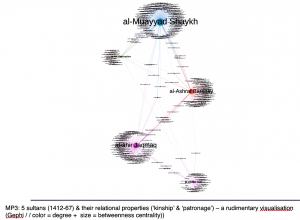 In the field of medieval Islamic history, such tools and methods have yet to produce any meaningful results, even if recent and on-going projects, such as the « One-generation » graph produced by the MMS project at Ghent University concerning the 15th century rulers of the Cairo sultanate and their entourages (still insufficiently exploited and commented upon), underscore the possibility of very relevant results.

It is evident that many historiographical sources for medieval Islamic history naturally present opportunities to use social network analysis to better grasp and understand history and the way it was shaped and understood at the time, for they include a huge amount of relational data between social actors. Of course, these relational data are used by specialists of the field, on a daily basis, and in fact social interactions and their analyses are usually quite important to support many studies. Thus, there are clear social interactions/social network orientations in many studies. But while embracing the notion of networks and their use to better understand history, specialists of Medieval Islam have largely dismissed Social Network Analysis methods and tools. This raises some questions for the field:

Do not get me wrong : what is currently produced is most of the times brilliant scholarship, and I am not arguing against this production, as it indeed brings a lot of new understanding to the history of Medieval Islam, as emphasized by recent and distinguished works (M. Eychenne, 2013; E. I. Binbaş, 2016). I am merely pointing to the fact that this production cannot address some issues of concern to Medieval Islamic history, because it intrinsically limits the possibilities of representation and analysis of larger patterns. If we want to address the idea and revive a comprehensive history of the social framework of the Medieval Islamic lands, or for example that of a putative “Medieval Islamic Republic of Letters” (M. Mūsawī, 2015), or the narrative role of networks in Medieval Historiography, and analyze at a large scale the systematic representation of social interactions displayed in the sources, we need tools and methods that allow historians to do that. Today’s best tool and proven methodology to represent and analyze larger patterns of social interactions between actors or actors and institutions, consists of what has been developed by SNA in the last decades and successfully applied in some cases to the Medieval History of Europe (I. Rosé, 2008;  J. F. Padget & W. W. Powell, 2012). Like all methodological approaches it is not perfect, and presents issues of its own related to questions of the researcher’s training, methodological construction, data analysis and representation. But it has already demonstrated some relevant results in the broader field of history.

Thus, it might be worth reconsidering the use of SNA within more general methodological issues concerning Islamic Studies, as part of an on-going debate. At the same time, we should also avoid the over-simplified debate between “Old” Traditional Historians and “New” Modern Historians (J. A. Winn, 1993), a conflictual claim that loses relevance in this context. Academics of all kinds may simply be interested in dabbling or experimenting with SNA for its potential to facilitate a different kind of working scheme (scale, methods) to investigate and propose results on unconventional historiographical and historical research questions.

When issues of social relationships are at the forefront of a research question; when social and political actors are a primary concern and are considered in their own social context and web of interactions- then the methods and tools of Social Network Analysis may be worth engaging in, along with other DH methods, as Maxim Romanov has successfully and continuously demonstrated in his work on al-Dhahabī’s Tā’rīkh al-islām (M. Romanov, 2013).